The disruption that the novel coronavirus caused last year was nothing like we’ve had in centuries. Luckily, we have amazing vaccine companies that succeeded, plus others like Novavax (NASDAQ:NVAX) trying their hardest. NVAX stock is still full of potential and today we will debate owning it.

The inoculation process has started worldwide. In the U.S., it is going very well and everyone that wants a vaccination can have it for free.

Economically, it hasn’t been a gold mine for the companies that brought it. This is not the financial golden goose, which is logical since it is not right to capitalize on a pandemic.

NVAX stock has struggled of late but it is leading the pack. In the past year, NVAX is up 25% more than MRNA and four times that of the S&P 500. It is losing steam fast, almost flat on the year, and fans should worry.

I am not a hater in fact I wrote about a potential spike just days before it happened. I am still pulling for it to come to market with their vaccine. What they are doing is noble, but it’s starting to feel like olden times.

NVAX Stock Is Not a Sure Bet

The company has been in business since 1987 and, so far, failed to have any vaccines make it to market. It has the word “vax” in its name, and it is strange that it doesn’t have a single one sell. The experts say that it is only a matter of time. I hope so, because I was actively traded it during its 2016 debacles. I caught the falling knife after it fell under $1 per share then.

Recently management delayed their application for their U.S. emergency use authorization (EUA). They believe they will file for one in the second quarter. I don’t think that investors will accept another delay without serious consequences to NVAX stock. The window of opportunity is closing on this vaccine as well.

Just before the pandemic, management reverse-split the stock to avoid de-listing. And then the stock soared on the prospects of them becoming one of the vaccine companies to save the world. It looked great for a while but now these delays are heavy burdens. The stock is well off its high but the headline is still looming, so it is a bad idea to short it. On the other hand, it is also risky to bet on its success with great confidence.

I don’t believe in rooting against a company when its success will save human lives. I am pulling for them and I hope they succeed soon. Experts agree that we will likely need shots every year, so there may still be ongoing demand. But they need to strike while the iron is at least lukewarm.

Next Move Will Come From Emotions 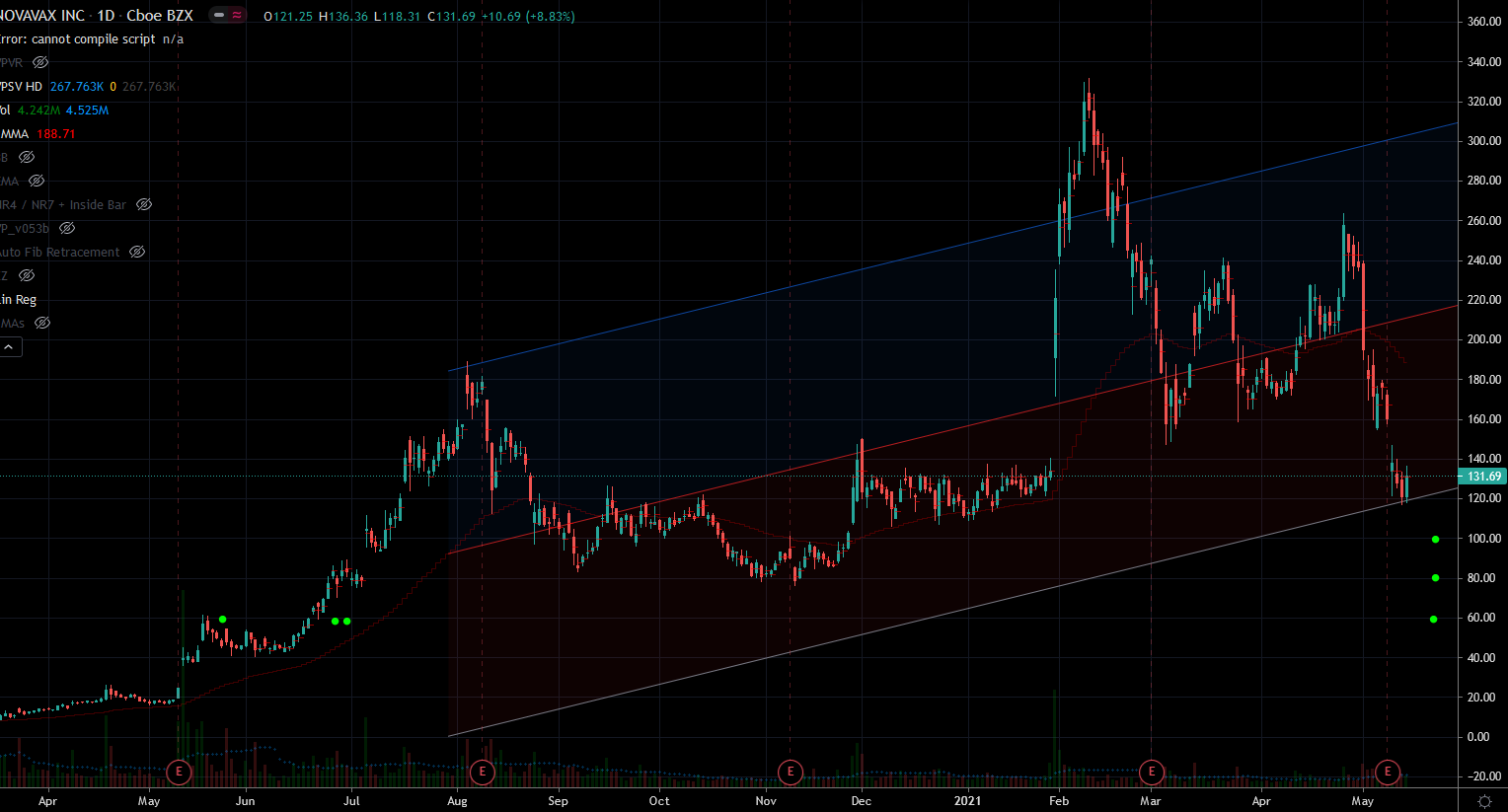 NVAX stock will move on expectations more than facts. The question of where it goes from here depends on how much hope there still is in the stock price. Expectations are a powerful motivator for investors. They often punish stocks even when managers deliver excellent financial results.

This stock has its work cut out for it, and holding it long involves a lot of faith. This is not something I usually do because I prefer to have an edge. I don’t want to risk losses when I don’t have a leg up on the competition.

Yes, this is a contest between a buyer and a seller. If I’m buying NVAX stock, it’s because somebody else thinks that it’s not worth holding.

My conclusion today would be that I would rather watch its successes from the sidelines. Technically, NVAX stock has fallen into support. But if it fails, it is possible it reverts to the $60 June breakout level.

On the date of publication, Nicolas Chahine did not have (either directly or indirectly) any positions in the securities mentioned in this article. The opinions expressed in this article are those of the writer, subject to the InvestorPlace.com Publishing Guidelines.

Nicolas Chahine is the managing director of SellSpreads.com.

Twilio Is a Sell as its Growth Story Has Failed to Bring Any Profits Yet
COIN Stock Probably Still Hasn’t Found Its Ultimate Bottom
Why Snap Investors Ought to be Skeptical
Big Oil Is Betting Big on Hydrogen
Stocks making the biggest moves premarket: CarMax, FedEx, Seagen and more